“So you’ve decided sainthood isnt for you, after all?”

John sat back, sipped his iced tea and let the words hang in the air for a moment before putting his sweaty glass back onto the table.

I opened my mouth to say something, absorbed his bon mots and then started to laugh.

“You may be a smart ass John, but at least you’re smart,” I finally said.  He grinned, picked up his drink again and played with the straw.

“You would have made a lousy saint, Paul.  We need you down here on earth, anyways.”

I stared at my coffee, then up at the dark gathering clouds.  I felt a few drops come down.

“You’re right, as usual. I probably would have pulled down the median holiness of the rest of them.  Team average plummeting isn’t good for business.”

We grabbed our belongings and went inside just as the heavens opened up and the storm bore down on us.

I’ve written about John before – he’s a good friend of mine.  If sobriety were gold coins, he would be Scrooge McDuck, minus the being a fictional cartoon character and the poor analogy of mine.  Let’s just say that he’s got time.  He is also a shining example of recovery, and I have been blessed to have him in my path and as an ally.  He’s a gentle soul with biting tongue and measured responses.

He mentioned to me once before about me being “scrupulous”.  I knew it wasn’t a compliment, exactly, but I knew he said it out of love and concern.  It’s been months since he said that and it’s been in my head churning slowly like freshly made bratwurst. A daily grind, if you will (sorry).  I was offended and confused at first, but then realized it would be better if I actually looked up the word before planning my next outrage.  To whit:

So while I am down with the first one, I was a little taken back by the second.  While they both seem very similar, there are some marked differences. The first definition is positive, while the second has a negative connotation.  Guess which one John was connecting me to?

Prior to our conversation on the patio there, I had been asking John for his advice about recovery, and more specifically, about my own journey.  He has known me for a little while now, so he is aware of how fastidious I can be at times.  I call him at times, often in a calm panic, about things that in the end I already know, but need confirmation about.  It’s almost like he’s the green light I need at times.  He’s the tarmac marshall on the ground, guiding the plane the last 20 feet into the terminal, light sticks and all.  I go to him (and a few select, oh so lucky others…ha ha) to make sure my “T”‘s are crossed properly.  He’s my Reverend Lovejoy to my Ned Flanders.

You see, the reason I bristled at this “scrupulous” tag was that I didn’t see myself that way.  Surprise, surprise – I get annoyed when someone sees something in me that I think I don’t have.  Especially when it’s not positive.  (“What? Talkative? Moi?  Sit down and let me tell you the 47 reasons why I don’t see it like that…in alphabetical order…” etc.)  So after brushing off the dust of my own incredulity, I started to allow this to absorb.  I let it sink to where it needed to sink to.  And it brought up lots of things for me.

The one thing I learned in recovery is that people aren’t perfect.  I know, crazy proposition, eh? I reckon that I was always trying to be Mr. Perfect in my active days (and was unconsciously trying to be Mr. AA in recovery). I certainly made it a habit of trying to perfect the slow death that I had embarked on in my drinking.  In school I strived for 100%.  Sometimes got it, other times wished I got it.  Nothing in between.   All-or-nothing stuff – what makes made-for-TV specials glow.  Perfectionism.  What a crippling hatchet.  But bred in the bone.

So now sober, and knowing that I cannot ever achieve perfection, I opened myself up to being wrong.  I almost liked being wrong – one more thing to fix.  Another opportunity to take a Universal Mulligan and start again.  Learn from the errors.  Tally up yet another failure and move on.  [Insert favourite inspirational quote here.  I will wait]. I had convinced myself that I had no issues with making mistakes, messing up, tripping over my own inadequacies and seeing me for the flawed yokel that I was.

What I have come to realize is that I am still afraid to make mistakes.  I harbour no ill will in admitting my wrongs.  I am good at that.  I am a Broadway-level understudy apologist at times.  I concede my errors, make the apology and move on.  Resentment free.  But I still do not like making mistakes.  It’s the all-or-nothing sweeping under me again, blanketing me, wrapping me up in an unrealistic view of life.  This is why I was so worried about too much recovery recently.  I feared that I wasn’t doing it properly.  That I would fail that as well.  That I would mess it up the same way I messed up my life.  Cause and effect.  History weighing heavily on me.

Why is there this need for me to not make errors, even in recovery?  I know in my mind that it’s going to happen, something to be embraced almost, nothing to be ashamed of.  It’s just taken a long time for it to hit my heart.  To scrape off the old wallpaper of perfectionism and brush on this imperfect pattern of acceptance and humility and selflessness.  Cull a few nasty branches off the Ego Tree.   Take a few good whacks at the trunk while I’m at it.  I am starting to actually embrace this through actions rather than sanctimonious intellectualization.  Oh goody.

So I have quietly, organically, without plan, began an effort of following every mistake or lack of judgement or error or [insert favourite “mistake” synonym here.  I will wait.] with a “Now what?”  Ok, so I screwed up by double booking job interviews.  Now what? I called one of the candidates back and he cheerfully took a new time.  Done.  I made a mistake in not doing something I promised my wife.  Now what?  Do it.  Stop overthinking it.  Done.

“Now what?” allows me to be gentle on myself with the added bonus of prompting me to take action.  Two powerful words.  Like “Free Jello”.  Or “Play through”. I don’t feel the need to hammer myself so much when I mess up.  I can look around and see that I am human, that this imperfection is what makes us all perfect in the way we were meant to be.  In an imperfect way.  Without mistakes, I am not given the chance to change or grow.  And that is why I love recovery – I am not only encouraged to be ok with mistakes, but gives me the tools to work with them.  And be gentle on myself.  I need that these days.

“John, I just don’t want to screw up the one thing that has given me life again.” I said in hushed tones in the crowded cafe.

“You haven’t screwed up Paul.  You’re here. But you’re putting expectations on yourself that  no one can live up to,” John replied, slurping the last of his iced tea, ice cubes dancing around the glass.

“I know that…I just fear that I will continue to mess up.”

“You will.  And that’s ok.  There isn’t much difference between us and the saints,” he said.

“What’s that difference? That’ they’re perfect or something?”

“Not that at all. Saints are sinners that got smart. We get smarter, more open, more loving, more available.  We don’t become saints though, but we do get closer to God.”

I wiped a sudden tear away.  I just wanted to know it was going to be ok.  I felt that it would. I tried to smile.

We sat without speaking, listening to the dull roar of milk foaming and the rain hitting the hard plastic furniture on the patio next to us. It rained for a long time. 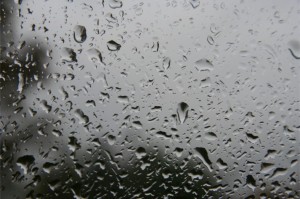