I don’t make new year’s resolutions.  And perhaps outside of some running targets I have in mind, I also don’t have goals.  I don’t do vision boards, and I don’t write down any sort of plans or schemes.  Perhaps I should, but for the most part I don’t like attaching myself to things like that.  But the one thing I do enjoy is what Mish from Mished Up has done the last few years – having a word of the year.  In her latest post, she discusses her challenges in coming up with the word, and what it means to her.  I have been greatly inspired by that, and this is my second year in doing the word of the year.

I tend to look at the word of the year (WOY) as a sort of mantra for me.  While I have many spiritual principles guiding me, I do like the idea of having one word that will take the helm, that will be a compass for me, that will navigate me both consciously and unconsciously.  Last year’s WOY was “patience”.  And it suited me – I was struggling with many things, internally and externally, and I required myself to wait things out.  To let things settle into their own ways.  To allow myself to step back and allow things to unfold as Creator would have it.  And while I crumbled at times, I found that being patient brought me more serenity and a deeper understanding of myself.

This year, after reading Mish’s post, I started to think about what word I wanted to use. Let me rephrase that.  I opened myself up to what word wanted to use me.  As I sat for a few moments and thought up some typical words – hope, dreams, forgiveness, etc. I found myself not feeling anything towards them.  Noble words and intentions they are, but they did not capture my imagination.  But one word jumped on me like a gorilla on banana bread (note – there is no scientific evidence that gorillas enjoy banana bread. Especially if it has walnuts in it.  Ewwwww.)  I tried to push the word away, but it was insistent.  I went to bed, hoping to sleep on it.  When I woke up the next day, that word was tattooed across my mind in capital letters.  Again, I tried to ignore it.

I went skating that same morning with my oldest.  He is a late bloomer like me, so it’s only now as a 7-year-old is he interested in skating.  We had the rink to ourselves and I watched him as he puttered about for one lap, tripping and slipping, but smiling as he fell.  He then began to balance himself more, and before we both knew it, he had done two laps without stumbling.  And as I watched him, that word hit me one final time.  I was watching it in action.  Creator was smacking me in the head with this one.

That is my WOY for 2015.  Ironic that the word wouldn’t let go of me.  Whereas I thought it a negative word, or a plodding and uninspiring one, I now see the nobility in it.  I can see how this can play out in this new year.  For example, in my running, I have hit a sort of plateau.  Winter training is often tough, as there are no races or clear cut goals until spring.  It’s dark and cold.  It doesn’t feel like any progress is being made.  It’s mentally and physically draining.  But this is where I need to persevere, like my boy on his skates.  And the small victories will start to add up.  Before I know it I will be racing 10, 30 and 42.2 km courses and this will all pay off.  I have to keep my mind on track.

Being perseverant in my recovery is important too.  I have rested on my laurels way too often this past year, and realize that I need to continue doing what has worked for me thus far.  Letting that go to the way side is dangerous for this dude.  Keeping in contact with other alcoholics and getting outside my comfort zone and reaching out and working my program is paramount to everything else.  I need to remind myself that this whole recovery thing doesn’t have a destination. The journey itself is the destination.  As it’s written – we “trudge the road of Happy Destiny”.  It’s not trudge to Happy Destiny.  We walk with purpose.  And that is what perseverance allows me – to trudge without distraction.

Perseverance has never been my strong suit, to be honest.  So this is going to be a tough one to follow through on.  I was a notorious quitter (except booze, of course).  If something had a whiff of being “too hard” then I shut that baby down before it even got started.  My tolerance for pain is lower than a snakes’s belly (I seem to have a thing for animal analogies today).  My ability to see something through is not second nature.  Giving up has always been Plan A.  In 20 years, I have never worked at a job for more than 2 1/2 years.  I was always on the go, one eye on the exit. Until this current job.  I have my eye on one particular job that may or may not be available right now, but other than that, I am very content with where I am at, and have mentally adjusted to the fact that I may even retire there.  We’ll see. But that is very unlike the old me to stick through something.

I would also mention that the opposite of perseverance, letting go, is also an important lesson.  I think of the Serenity Prayer here – learning to accept things as they are, to change them as needed and having the wisdom to know the difference. So sometimes I know I will need to back off.  To see that perhaps what I am persevering in isn’t a healthy thing.  I learned this very lesson just a few days ago.

I was on a vegetarian diet for the last 4 1/2 months.  No reason why I swore off, other than I thought I might get healthier.  I didn’t make the switch as a forever type oath.  I just wanted to see how my body would react.  Things were seemingly going well until a few weeks ago.  I found my energy waning.  I couldn’t focus on anything.  My mind felt foggy.  The best way I could describe it was how it felt when I went off anti-depressants – it was like my brain was heavy.  I was getting headaches.  No matter how much I slept, I felt exhausted. Always.  I had troubles completing work outs.  I even bailed on one.  During this time, my wife would say that perhaps the vegetarian diet wasn’t for me.  I persevered in staying away from meat, fish and chicken, even though I was lethargic and felt off.

It got to the point where two days ago, my wife had had it with me.  She told me I was always grumpy and complaining about being tired and told me “go eat a burger!”.  I did some online sleuthing and confirmed what she had been saying – I was iron deficient.  My vegetarian diet was more of a carb diet for me.  I was a vegetarian who wasn’t eating vegetables.  Or much protein.  So my stores of iron were diminishing until I had the tell-tale signs of iron depletion – lethargy, inability to focus, increased lactic acid (which would explain my muscles always sore).  So my perseverance was being channeled in the wrong way.  It morphed into unhealthy persistence. My ego got in the way, and I suffered for it.  And my family did.  (I am back on meat now and I already feel better).

So not only do I want to practice perseverance, but I also need the wisdom to know where to apply it.  And that is going to be the challenge.

Whether I am on a snow-dusted track on a freezing day, in a lull in my professional life, or struggling in some other aspect of my life, I will persevere.

I will persevere to greatness.

Happy New Year to all. 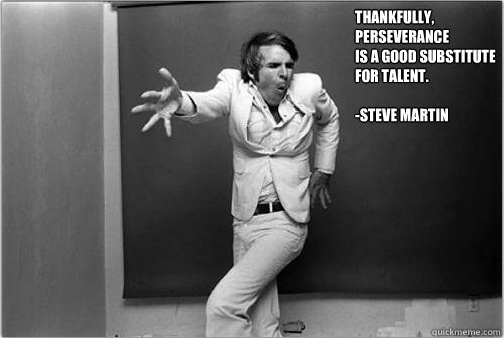