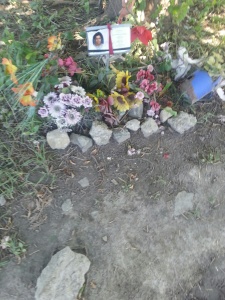 I was running yesterday in a nearby park area and stumbled across a makeshift memorial site.  A young man, who lost his life several years ago, still being kept in memory by still-fresh flowers and keepsakes.  I had to stop and take it in.  I also had to keep in mind that this memorial was located at the bottom of a bridge.  A very high bridge.  What made this young soul decide to jump at that time is unknown to me.  But the pain had to be scorching enough to end it in a gruesome fashion.

Post-run shower had me in tears.  Unexpected tears. Sure I was heartbroken at this lad, but I was more overtaken by the emotions of both gratitude and grief regarding the deadly nature of alcoholism.  At the meeting the other night I saw people who I thought “had it” standing up and getting chips for a month or two of sobriety.  People who I understood to be strong members of the program, but perhaps were not as such.  Perhaps they felt they had done enough.  Perhaps they felt they had it licked. Perhaps they were without that mental defence against the first drink.  It’s not for me to judge.  But what struck me was how fortunate and blessed they were to make it back.  Because so many don’t.

I thought about how this illness takes so many people – through suicide, heart disease, liver failure, car crashes, drunken accidents, alcohol-induced violence, etc.  This is a killer thing we have and I am sure as hell am grateful that I am where I am right now.  I know we joke about it sometimes, and try not to get too morose on the topic, but I have to remember that this kills.  It ruins lives.  It ruins family lives.  It wrecks everything in its path and takes no prisoners.  It takes hostages, which it later tries to execute in a grisly way.

In my own struggles, I could have easily taken a life.  Several lives.  I could be incarcerated right now.  I could be making a trip to a memorial such as the one I ran into.  I could be the one that has his name on a weathered placard, where dogs come to sniff while their owners walk them.  I could have been in heaps of trouble.  But I have Creator’s Grace to thank for this, and I don’t ever forget it.  Even in the meetings or online when we laugh about crazy stories, I have that kernel of understanding that things don’t always turn out well.  That often people lose lives or take lives.  What centers me is the horrific nature of this illness.

One doesn’t need a rap sheet or numerous stays in hospital or detox or the psych ward to have this illness.  One doesn’t need to be divorced or homeless or have severe health issues to have alcoholism.  One prays that we don’t get there.  Some figure this out earlier than others.  Some go to the bitter end and never take action.  I am lucky.  I am blessed.  Those people who laugh in the rooms or out here are lucky.  But we work at this.  Complacency has taken its toll on others, and I know I have been guilty of that too.  But I refuse to allow myself to lapse on all fronts.  Action is what got me here and action is what will continue to propel me to well being and contentedness.  Serenity is what I seek, and like my sponsor James talks about, clarity.

I was once like that young man standing on that bridge, staring out at the hard dirt ground below.  I was on the teetering point of my life.  I was suicidal.  I was also killing myself slowly with booze.  I also didn’t know how to live without alcohol.  Bridges and subway platforms started to look good.  But in the end I knew I was put here for purpose.  I just happened to understand dying the death I was headed towards wasn’t it. In the end, surrender was the key to my recovery. Willingness, honesty and open-mindedness opened doors that I never knew existed.  I stopped fighting and allowed myself to fall into where Creator needed me.  And I continue to do that to this day.   Some days are better than others, but I have come to a peaceful place where I can feel, I can love, I can be transformed and I can do my best to help others.

I wish that for everyone who reads this.  We don’t do this alone.