Yesterday we sat in court and waited for the judge.  He was running a few minutes late.

I am used to courts, as some of you might know.  But this was different.  There was no sentence to be handed down, no incriminating evidence to be displayed, no legal jabberwocky jousting.  Just our family and some friends.  The room closed off.  A private audience.

The judge walked in and we rose.  He sat and we followed suit.  He explained that as a family judge, he has a difficult job.  He has to break families up on a daily basis.  He decides where children sleep that night.  He always leaves someone angry at him.  He makes hard decisions for others.

But there are times when his job is rewarding in another way.  There are days where he is happy to be presiding, he explained.  And yesterday was one of those days.  A day where a family is pulled together under the eyes of the land and Crown.  A day where there is no longer any doubt.  Detractors and sceptics need not apply and linger in the halls.

A day of final rest. 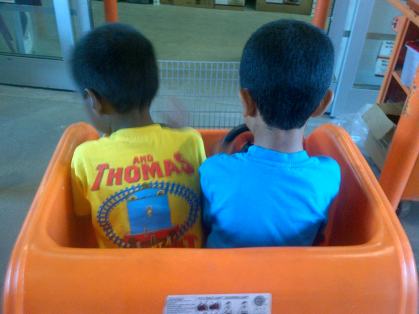 When we saw his face, we knew he was ours.

We were at a convention where hopeful adoptive parents came to peruse the local children’s agencies who were showcasing their young charges.  Hundreds and hundreds of children available, all looking for loving homes.  Some were already in loving homes – foster homes – but needed a soft and permanent place to land.  We had a crash pad ready to go, and an older-brother-in-wait who didn’t quite know about his potential new life job yet.  One that he would later carry out like he was born to do it.

We already had a biological child but had always felt the pull to adopt.  We had spent thousands of dollars and countless hours doing seminars, plans, interviews and God-knows what else to move on in the adoption process.  International was our first choice.  Ethiopia, South Africa, Vietnam.  Touch and go situations.  But when my DUI came about and the details of that came out to the agencies, we were red-lighted.  Flagged for good.  Black balled.  We put the plans of a new child on the back burner.

Papi* needed to get sober first.

And when reconciliation with my wife and son came to be months later, we slowly flirted with the idea of adopting again.  With international adoptions ixnayed, we hesitantly went local.  And decided to see for ourselves what lay in our own backyard.  It was a shot in the dark.

And that’s when we saw him.

The judge flipped through the paperwork in front of him.  My wife and I, our sons and our case worker all sat in the front.  Our family and friends sat behind us.  There was no court reporter, no security officer with cuffs and gun nearby, no fancy lawyers in freshly pressed suits whispering in huddles.  Just a smiling man with Coke-bottom glasses and a robe.

I could only say that my experience of court was profoundly different than when I had my trial.  And yet, I was sweating more yesterday than even when I was getting jackhammered by the prosecutor last year.  But this was a good kind of nervous.  An Axe Body Spray type of situation.  A first prom type sweat.  A receiving good news by mail type of perspiration.

“As of this day, April 30, 2014, I declare your name to be -” and the judge announced the name.  The same way I announced our newborn son’s name to the tired family in the hospital waiting room years ago.  The same inflection of joy and finality and assuredness that the moment was cemented beyond reproach and ordained by God and Country.  That the very words coming out of our mouths were as light as the air used to form them and as sure as the ground beneath our feet.

We all applauded and took picture with the judge.

We applied only for the little boy who we fell in love with.  We didn’t put in for anyone else.  Unusual, we would later find out.  We went through many interviews, home visits, discussions, paperwork and lots of hours wondering if we would be the lucky family.  The boy was half-native, half-Caribbean.  We weren’t native, so we had a strike against us.  They wanted to place the boy with a native family.  I also had to explain my DUI and alcoholism.  We weren’t sure of things at times.

We finally got word that we were the ones.  It was then time for supervised, planned visits.  Putting out toes into the water.  Forming a relationship with the foster parents and their family.  The boy’s own family here.  Learning the richness and heartbreak and joys of his young life.  Seeking knowledge and guidance from those around us who had gone down this path before.  Legal delays and wrangling.  Growing pains.  Watching the foster mother weep as my wife took the boy they raised as a baby leave for good.  But knowing we’d be back to visit.  And we have and still do.

Knowing that the boy’s biological mother was (and is) an alcoholic and drug addict put things in perspective for me.  It would seem the Creator put this young boy in my life as a way of paying back the Universe.  I have the privilege and responsibility of raising a boy whose mother is too sick to do so herself.  The same way I was too sick to care for and be a part of my own family before I got well.  A living amend, as they call it.  Living a life counter to my old ways and paying God’s grace upon me forward.   A cosmic IOU that I get to pay in full…and more. 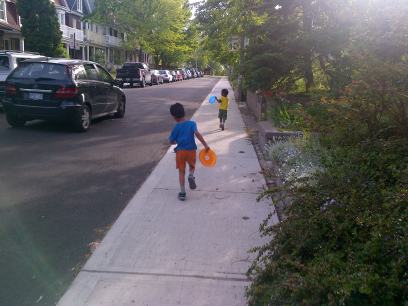 We went for a late lunch after court.  The rain was relentless and lazy.  The boys played and ran amok (we had a private area) and we all took pictures, made jokes and  ate well.  We had a cake with their picture on it with the words “Brothers Forever” stamped on it.  We laughed and reminisced.   We finally landed at our place and hung out for a while.  Tea, sweets, board games ensued.

The boys were still bouncing around from the sugar and excitement.  They continued to play like they always did – with reckless joy and with a connection that only brothers can have.  No masks.  No pretence.  Just sibling love and adoration.  The occasional sucker punch to punctuate a point.  Random nakedness and streaking down the halls.

Soon enough it was pyjama time and bed.

They said their prayers and crashed heavily into slumber.  Weary from the day.

I went downstairs and looked at some of the pictures, and recalled something that happened just before the leaving for court – I had passed an image of myself reflected on the car window as I was getting something from the back.  I paused.  I took another look and thought to myself “wow, I look old“.  Well maybe not old, but different.  Aged, mature, greyer.  I almost didn’t recognize myself.  And even as I looked through the pictures later on at night, I still couldn’t shake the feeling that something was different about me.  Was I starting to look like my dad?  Was it something I was wearing?

I am still not sure, but perhaps it was because there was yet another piece of the Creator’s plan for me being put in place.  The complexion of my life was changing and it was reflecting like my image mirrored the complexion of my older skin and face. Just like when I see my boys come down the stairs sometimes and think – wow, their faces have changed, they’re growing up and into their own bodies.  Perhaps that is me right now.  Perhaps it’s our family collective.  We are growing.  We are coming into our own…individually and as a unit.  We are seeing where this path is leading us.

My face may be weathering, growing lines, getting roughed in, settling into where it needs to be, but then again, so is my journey, my path, my life. My boys – brothers first in spirit and now in name – have given me the gift of learning all over again.  They teach me.  And I have to be open to that.

Yesterday was a joyous affair.  The boy landed in our lives and hearts when he was supposed to.  We will honour his spirit guides and ancestors and those who nudged him towards us.  He was always ours, in the heavens before landing.

And now the boy is ours.  For good.