I don’t imagine there are too many alcoholics out there whose rickety IKEA bookshelf aren’t overstuffed with all the classic and latest Tomes of Wise Nuggets to Live By.  There was something magical about cracking open a new book telling me how I can Change My Life For Good.  Just follow the basic exercises and in just 30 days, my life would turn around! A new ME!  Problem is, active alcoholics like me didn’t like doing exercises that made us actually look into ourselves, to find the real us, just itching to burst free like a new born golden goose. To look into myself would mean circumnavigating around that very obvious Elephas maximus that was my alcoholism. So I tended to read the first 10 or 12 pages and then dust it to the remainder bin.  Next.

My favourite sub-category of the self-help genre was the Leadership Guide.  I figured that since changing my life from the inside out wasn’t an option (see Elephas maximus, above), so it made sense that it would be easy to fix it from the outside in.  And the simplest route was in the realm of the workplace.  No emotions involved, no personal relationships to worry about, nothing but quarterly objectives to hit.  So, being a leader (if I read the back covers properly) would bring happiness to my life, would fulfill me, would put me on the road to power and prestige. I would arrive.

I had tons of books on leadership – from thin pocket-sized pamphlets to majestic hand-sewn Encyclopedias of Wisdom.  I could either learn in 10 minutes or take years in the practice of being Head Honcho not only in the workplace, but in life itself.  Now, I was already in management level, so people had no choice to listen to me, but I wanted more than that.  I wanted respect.  I wanted people to look up to me.  I wanted people to see me as a personal saviour, if you will.  I wanted to be seen on the scene, you hep cats.  I wanted to be a Level 5, Kim Jong Un type of Glorious Leader.

Of course I failed miserably.

You see, much of what these books relied upon was a single, simple precept.  They were based on an unspoken agreement that the reader had that one thing that they needed to even begin the process of being the new Captain Picard or Colonel Potter. That thing was confidence.

Confidence.  I would read the word over and over again and it struck no chord with me.  It was a blank stare into a mirror.  But without the mirror.  Nothing up against another nothing.  The word might as well have been in Sanskrit for what little I could comprehend.   My life had been devoid of confidence for so long that it was alien to me to think about somehow reviving this thing they spoke of in self-help circles, in Take Back Your Life seminars and bumper stickers.

Confidence. The thing that so many people had shooting out of them like a sprinkler, showering us with glittery godliness and super white teeth.  The thing that I mistook for overblown ego and machismo and blowhard bravado.  The thing that I craved so desperately that I would do anything to have it.  The thing that pushed me into the dark corners and away from the place I really wanted to be – with all of you.  My insides screamed to look like your outsides.

Confidence. None. Zilch. Zero. Nil. I stared at your shoes while I offered a weak handshake.  I trembled in the presence of those who made the mistake of liking me.  I hated and despised those who were comfortable with themselves.  Phonies. Charlatans. Ass kissers. Egomaniacs. And yet, I so wanted to be like them.

I was jealous of the guys at my work who would charge the hill even without knowing all the facts.  I hated them for that and at the same time envied them.  How could they know for sure what to do without all the information?  How dared they lead others on a hunch, or on something other than compelling evidence?  I feared when they were right.  I feared when they were wrong.

Many years ago, I was forwarded a well known power point based on the leadership style of General Colin Powell.  The part that caught me attention was this:

“Don’t take action if you have only enough information to give you less than a
40 percent chance of being right, but don’t wait until you have enough facts to
be 100 percent sure, because by then it is almost always too late. Today,
excessive delays in the name of information-gathering breeds “analysis
paralysis.” Procrastination in the name of reducing risk actually increases risk”

I was the 100 percent guy.  I was the absolute-sure-beyond-measure guy.  I was the no-one-can-argue-this-ever guy. And why was this?  Why did I have to be completely right before leading the team in hopeful victory ?  What was it in me that needed to be so utterly armed with irrefutable facts before engaging in even the smallest of discourse?

Fear of looking stupid.  Fear of failure.  Fear of not being perfect.  Fear of rejection.  Fear of being laughed at. Fear of making decisions. Fear of risking.

Fears by the wheelbarrow.  Grab a spade and dig in.  Lots to go around.

What it came down to in the end had nothing to do with leadership, or learning certain goal setting skills, or being an expert on reading people or any of the other tools they laid out in those well-meaning books.  It came down to me being me, and liking what I saw.  It came down to learning to see me for my values, strengths and vulnerabilities.  It came down to seeing that I was not an order-barking machine that needed stronger steel and bigger batteries, but a loving compassionate human being who needed to love and to be compassionate to himself first.  It was about digging my hands into the gravel of my soul, rattling it and stirring it about, lifting my palms up to the sky and announcing to the world “I’m OK”.

And from that is borne true confidence – a contentedness about myself that can be reflected onto others.  A trust in myself and a chance to cut myself some slack that is extended to others. I can lead others because they see in me that centeredness that allows me to be present and knowing that I can be assertive, and yet make mistakes.  I can charge from a position of both humility and strength. I can finally lead by example, by character, by integrity and dignity – things I easily pawned for a bottle of vodka. I now sparkle from the inside out.

I lead by looking at and learning from other leaders, from the men and women in the rooms, from the spiritual leaders and their actions and teachings, from my own children.

I lead by following. 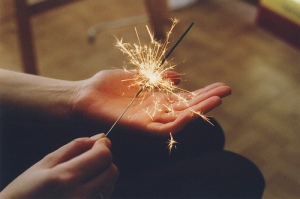